We see a lot of beautiful and interesting things on the web lately. Even on the mall, lots of nice stuffs are on sale. Popular celebrities sport all the latest fashion, from clothes, shoes, and accessories to going to all the hottest events and locations. We surf the web and see all these things daily that we temporarily get blinded by what we see mistaking it for real life. 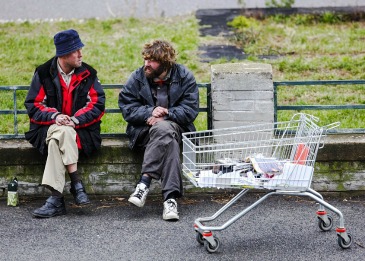 Unfortunately, there is another side in life we seldom see highlighted on the web or by media but is everywhere around us. When we go out of our homes and travel to work or school each day, we see poverty all around us. This reality is especially true in developing or third world countries where people can barely make both ends meet. Even earning enough to buy food for the day is a struggle for many families and the homeless are often ignored.

It is a shocking – but sadly unsurprising – statistic that “one in four households struggles to eat well regularly” (Report, 31 March). Young Women’s Trust research shows that half of the mums under the age of 25 have to skip meals to feed their children, and a quarter have used food banks. This is not just about “eating well”: this is the most basic form of poverty, and it’s having a devastating impact on young families. It is less astonishing when you consider that those under the age of 25 are not entitled to the national living wage and receive lower benefits; from tomorrow, 18- to 21-year-olds will have their housing benefit removed.

Food insecurity remains to be a constant dilemma for these people, something that many of us take for granted each day. Come to think of it, the food industry waste tons and tons of food from restaurant/ fastfood leftovers to foods beyond their expiration dates that are actually still safe to eat but just goes to waste.

Food poverty needs to be understood in its social context in order for long-term solutions to be found. It is this kind of fine-grained ethnography which enables connections to be made between the state and its policies, the market, and the voluntary sector.

While wages have risen very little if at all in most sectors and benefit entitlements have often been cut, some people turn to food banks as a coping mechanism. In the UK today, the main food bank charity, the Trussell Trust, has more than 400 such centres and there are likely to be at least as many independent food banks. They rely on long-life food donated by the public in supermarket and school collections.

Wherever you are in the world, most of these poor families are not educated and have a hard time looking for a better paying job. Many of these people work manual hard labor just to earn a few measly dollars daily. For them, no work means no pay too. Getting sick is not an option because their family will starve. And as if the reality is not bad enough, news about governments cutting back on the funding of several basic government services can even push them farther below the poverty line.

A government shakeup of welfare payments being introduced on Thursday will push a quarter of a million children into poverty while wiping thousands of pounds off payments for bereaved families, according to research.

Analysis for the Guardian reveals that a family whose third child is born before midnight on Wednesday could be up to £50,000 better off over 18 years than one whose child is born on Thursday.

Meanwhile, a terminally ill man has told the Guardian that his wife and children will see tens of thousands of pounds wiped off their bereavement benefits if he survives beyond this week’s welfare deadline.

The man, from Barnet in north London, who spoke under the pseudonym Alan in order to protect his family, hit out at the “callous and brutal” reforms that will limit payments to widowed parents from many years to a maximum of 18 months.

The crunch for families celebrating a new birth or grieving the loss of a parent is a result of changes coming into effect on 6 April. They were announced when George Osborne was chancellor and are being enacted by Theresa May’s government. One of the changes means all households that have a third or subsequent baby will – aside from a limited set of exemptions – no longer be able to claim child tax credits.

Policy in Practice found that more than 600,000 families – championed as the “just about managing” households, which the prime minister vowed to protect on her first day in government – would be hit by the child welfare cuts, while many more could be affected by other cuts.

Poverty is a global concern affecting millions of people from different countries all over the globe. Even if it is not highlighted in the news daily that does not mean it’s not real. Many families struggle with putting food on the table and in providing other basic life necessities.

Unfortunately, many governments today are making drastic budget cuts that will reduce funding for basic government services and subsidies that can potentially affect millions of people. Poverty will likely remain a prevalent issue of our times if the government fails to make lasting solutions for this problem. Empowering the people is the first step to totally eradicating poverty but governments all over the world fail to do this and get caught up in the many myriads of controversies that define politics from then and now.

The Prevalence Of Poverty Find more on: OnlineCloudBackupServices.com